Anki's robots Cozmo and Vector coming back to life, moving to Pittsburgh

PITTSBURGH, Feb. 24, 2020 /PRNewswire/ -- An army of robots is invading Pittsburgh. Don't worry, unless you're allergic to cuteness, they're harmless. 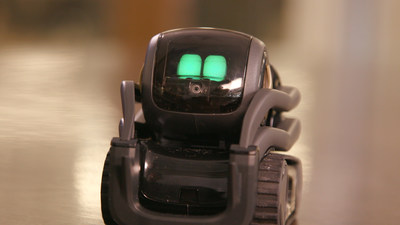 Vector and Cozmo, originally developed by the Silicon Valley robotics company Anki, represent some of the most advanced robotics capabilities in the world. Anki had $100 million in revenue in 2018, and was seeking a billion-dollar IPO.

"Anki went out of business, so I saw this opportunity to get the beloved robot Cozmo, which has sold more than a million and a half units," says Jacob Hanchar, of Pittsburgh ed-tech startup Digital Dream Labs. "The products themselves reach people's emotions, and communicate on such a peer-level, in ways that no other robot to date has been able to do."

Cozmo and Vector look the same, but are very different. They're so much more than just toys.

"Vector is truly autonomous," says Hanchar. "He's your peer robot, who goes and does stuff by himself. You don't have to control him with a controller, he just does his own thing."

Cozmo is the older brother.

"Cozmo is still beloved," says Hanchar. "What makes him cute is that he has these expressive eyes, and you're able to communicate with him through expression. Both robots do that. Cozmo requires a constant connection to an app to get him to say things, and do things. That's where there's a major difference."

What Hanchar found was that it wasn't just kids who were connecting deeply with these robots.

"There's veterans who suffer from PTSD," lists Hanchar. "The elderly who need to be reminded to take their medications, or who feel lonely. Children who have learning disabilities or behavioral disabilities really connect with this robot. Adults with various disabilities, or shut-ins, or people who suffer from Tourette's. For many people, he is the portal to the outside world. Vector opens doors in ways that technology has not been able to do."

Digital Dream Labs has expanded its staff to 13 since the acquisition.

A $75,000 Kickstarter campaign for the robots met its goal in the span of a single day, which indicates how much interest there is in these robots.

"The Kickstarter is the first phase to start getting going with this whole idea of open source and developing this platform that autonomous vehicles can use. It's the first step, and a giant leap for the way we think about robotics, and how robots are going to operate in the future," says Hanchar.

Anyone will be able to program them, to do anything they want.

"There are 200,000 Vector users who can contribute to his development. So we have a tiny robot army."

This isn't far-in-the-future science fiction. It's all happening soon.

"We intend on bringing the Vector line back in time for Christmas," says Hanchar.

A pioneer in STEAM technology, Digital Dream Labs develops entertaining games that just 'happen' to teach core pillars of education. The company currently has games that teach: Coding, Math, Art, and Chemistry launching this quarter. Their games are in over 3,500 school districts. Digital Dream Labs recently announced their partnership on numerous projects, including a game for youth integrating Robotics and A.I with the music industry. For more info, see digitaldreamlabs.com.